While we work our way through our 6wk study of European Rediscovery of New Zealand we're also continuing on with Story of the World, Vol. 3 (at a lighter pace - audio C/s, maps and discussion) and our Sonlight Read Alouds.
Last week our SOTW topic was The French Revolution, an era of history that seems to generate a lot of interest in our home so we've gone back through favourite audio books:

Read a few books. For Daisy;
~A Tale of Two Cities (Usborne Reader)
~Redoubt the Man Who Painted Flowers This book influenced the background for Daisy's cut-n-craft to go with SOTW 3 Chapt 25, The French Revolution, & Marie Antoinette. Daisy has yet to colour the page in and glue Marie Antoinette on.
We've used pages 6 & 16 from this notebooking set ...... and here is the end result ☺ 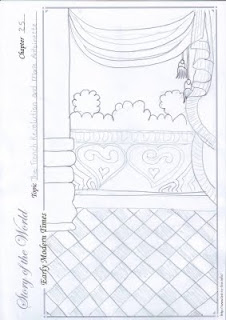 And for Bobs we're continuing to read aloud a new, to us, SL title;
~In Search of Honor
While a very "good" book I enjoyed The Reign of Terror and Les Miserable more. (We have yet to enjoy listening to the unabridged version of Les Miserable - all 50 something hours of it - which we'll get to during our next cycle through world history).

ETAx2: We also enjoyed Karen Savage, at a slightly later date,  reading aloud The Scarlet Pimpernel, The Elusive Pimpernel , and, El dorado. To those unfamiliar with the story, it appears that the discord between Sir Percy & his wife will detract from the story - stick with it, as character and a committing love prevail.
Bobs didn't find it mushy or too romantic, which I thought he might.
Posted by Chelle at 10:19 AM

Hi Chelle :-)
We just did that chapter last week. I found a book called "The Man who Painted Roses" on trademe. I have been lapping it up this week. It may be suitable for my older girls (11 & 13), but I'll finish reading it first.

We really are 'on the same page' then :)
Thanks for the book mention (for me) hoping our library may have it.