Titus McPerky was not doing well on his own, despite having buddied up with Boof-Boof,  one of our older chickens. He'd get out of his enclosure and hang around the hen house until Boof-Boof was let out in the afternoon and then he'd just mope.
So we've been trying to get him company of his own kind - turkeys are very social critters, and need their own kind!

He now has a "girl" friend and is slowly returning to being a McPerky sorta turkey.  Miss McPerky currently has no first name. 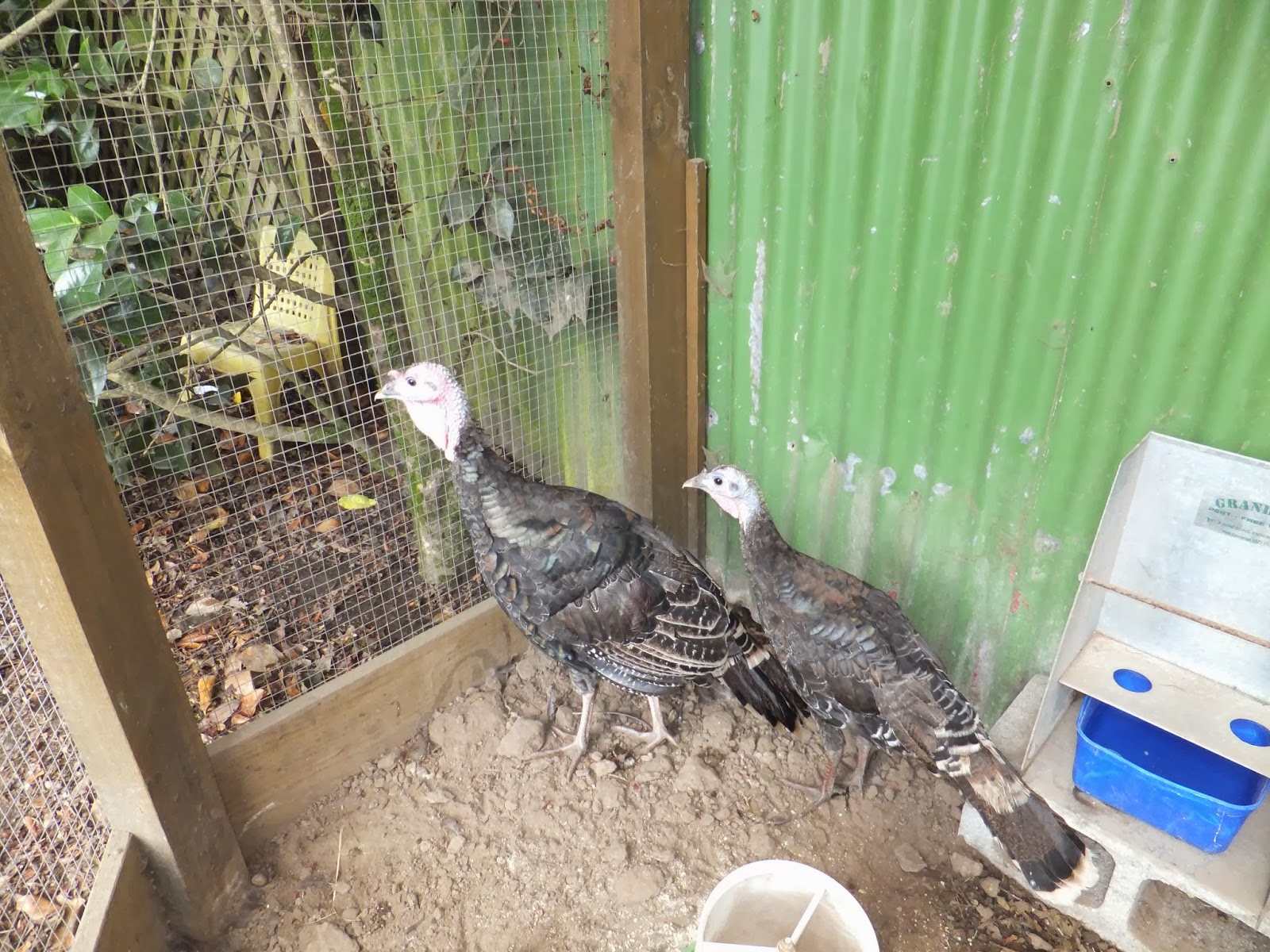 And just for Tracy ☺:
The pigeon loft is built and up...  Dn took note of ramping up tactics from history so we could get this thing off the ground - it's very heavy.  Ramp in place, we literally pushed it up to the top, then Bobs & I steadied it while Dn drilled and screwed it into place 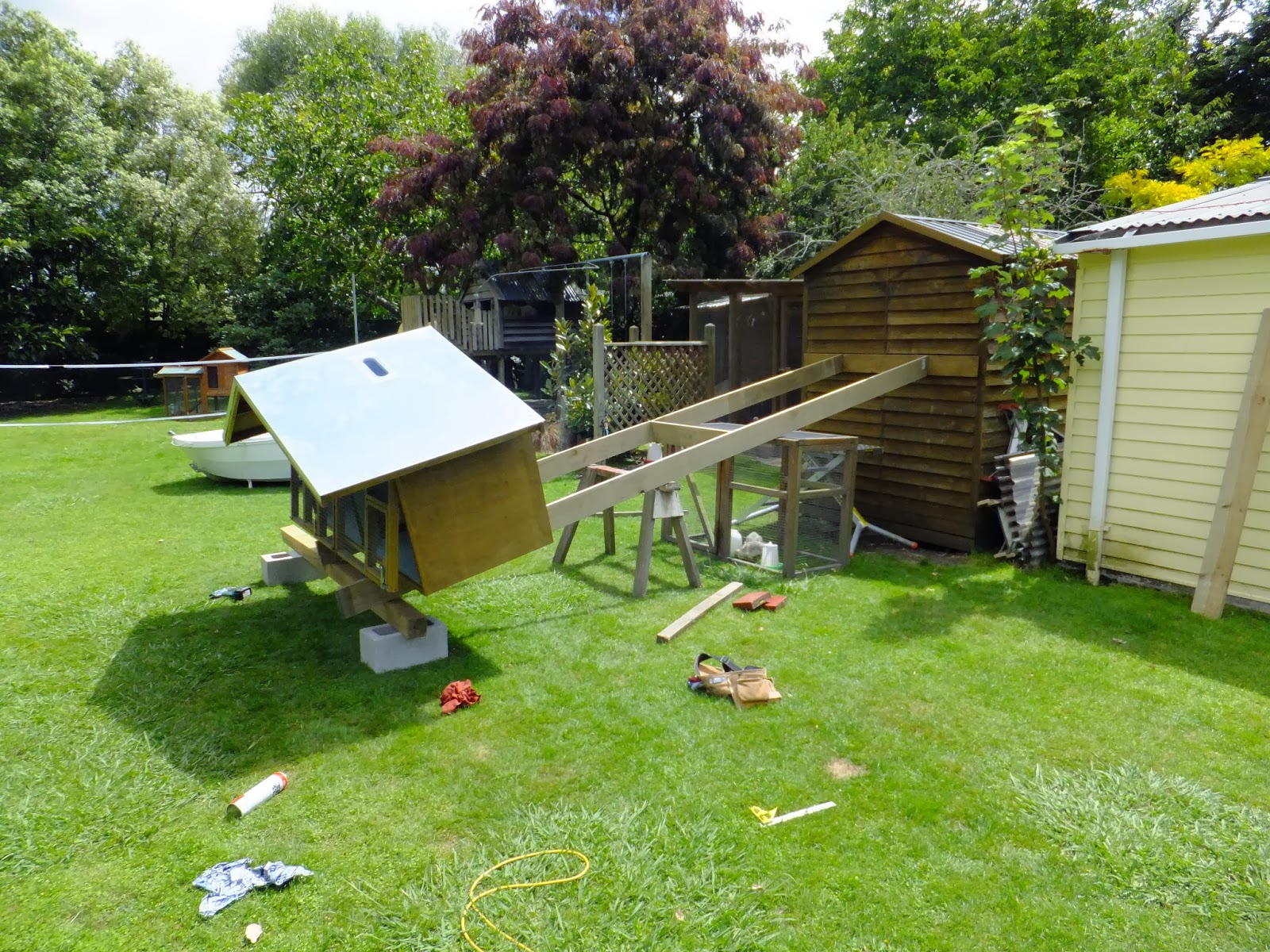 Oh~~so exciting! and to just SEE that green grass makes my heart zing! I really like that Leroy, he is a fellow after my own heart, the way he is protecting those ducks! That is what I would be doing too! He is some dog!

I'm glad there is a Mrs. McPerky now too!!! That will make life so much happier for all...less depression all around!

That set-up to get the pigeon home up is so smart!!! I'm super impressed. Did your hubby make that whole thing from scratch? Wow, that is really something! I can see why you have visitors so often. We once stayed at a B&B in Maine that had a set up *almost* as nice as yours...and we had to pay to stay there!!

Thank you so much for the pictures!! It is so great to see how the animals are growing. The ducks in your daughters lap do look very pleased with their arrangements!

Can I come over now?!
Tracy

Tracy, it is so fun to find your comment here!

The grass is really that green (it's not photo shopped :-D )

Leroy is Mr. Personality plus!
He just loves to smooch and we just flat out love him to bits, as do 95% of of visitors ...and so do all our pets- well Titus doesn't, silly turkey ;-)

Dn did build the loft from scratch.
He drew up a few rough sketches and set to work.
He asked that I gave him the timber and all the gadget pieces for christmas - and then he started measuring and cutting and assembling.
You can't see in the photos but it has sky lights and this nifty nesting boxes, and the metal trays at the bottom pull out - for ease of cleaning.
So clever.

(You don't have to pay to stay here ... getting here may be an expense costing issue for you though.)

Good idea.
You come on over now!!!
Or aren't you allowed out to play today? :-D

Every pix of Leroy has his face totally intent in a motherly concern fashion for his brood! How can a dog like that NOT be something extra special?! It would only seem right that Titus would see Leroy as someone who is trying to police or foil his dastardly plans! I'm laughing out loud here...but, doubt you can hear me; but I got a good chuckle out of that!!!! Did you see that funny animation "Chicken Run"?
Product Details
Chicken Run 2000 by the Wallace and Gromit team--Dreamworks Production? Oh my..so funny...If you haven't, you might look into it. You don't get to see too many chicken movies/animations now do you?!!

The details of the loft make it sound even better than the picture showed! The metal trays at the bottom are my favorite details as chickens are quite messy! And to think all this was done since Christmas???!!! Speechless.

I'm on my way!
Tracy

Glad you got a chuckle... pets can be so funny.

I'll have the cup of tea waiting ... and you should be in time for the first birthday party
(Now wouldn't that nice!)