We've found, out of all the breeds of chickens that we've had, that our Japanese silkie bantam made the best pet.  Snow White was the most placid chicken, and wasn't fazed by kittens trying to leap on her,  little children picking her up at odd angles,  nor the dog racing past her at full speed barking. We had her for 11 years and will miss her 'bullet proof' demeanour in our back yard. 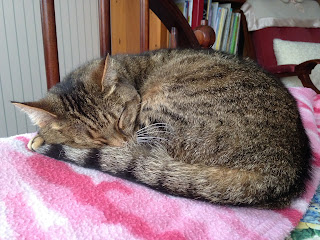 Don't be fooled by the sweet slumber - this cat is the most mischievous cat we've ever had - she's always where she's not supposed to be, leaps out on anything that is walking past her hide-y hole, spends huge amounts of time trying to "get" the pigeons as they come out of their coop; and, she bites !! to show she loves you.  Daisy thinks she's wonderful.


These moths never fail to amaze me; after being in it's hard cocoon for 2 years - which was sitting on my kitchen knick-knack shelf - this fellow started tapping his way out.  Once the moth was out  I popped it outside, where the cats wouldn't get it, so it could dry off and strengthen.
Our four new calves (wieners) above, just arrived.  They are so sweet and friendly.


Daisy named some of last years calves after the trolls in the Hobbit... they definitely sport the very troll like booby expression.

(I couldn't get a picture of William, he's a very shy boy and doesn't like the camera.)
Posted by Chelle at 9:24 PM

After days of sipping this critter post, I am finally leaving a comment! Isn't it funny how our daughters love the cats that have the worst behavior?!?!! I found a new cord behind my computer that she has eaten through into three different pieces; at least that is what I've found so far. I really love having at least two cats at a time, for their company, but I'm not sure I could afford two cats that run up replacement charges!!!
On the Emperor Moth---so awesome---did you find that chrysalis or did you order it? I just know you probably found it...but, I've not had any luck here in Michigan finding chrysalis' yet? I'm tempted to order some just release here and hope they (whichever one's I get) might stay here and restart my area. I think I remember you sharing that you had that chrysalis inside and was waiting to see if it would ever hatch!
That Leroy! So cute in his new coat!!!
Jade and Hoodie----now, Hoodie is a Silkie, right?! But what is the black and white one? is it something 'rock'? So cute! It is good to hear another rave about the Silkie's as they are very popular here too. Dd was wanting to get a special bird, for her, as her special pet, and had mentioned a Silkie...now to find one around here to buy! I don't remember if the one's we saw were specifically Bantam's or not.
Birds---now that I've kept our bird feeders full---it is beyond cold, "polar vortex" cold, and lots of snow on the ground; I've seen so many of my fine feathered friends this week!!! We even had a opossum under our feeder - you will have to do a quite search to see our opossum's! They are ugly! and *normally* nocturnal, but with this cold weather, I'm not surprised to see them looking for food at any hour.
Chess, Penny, and Elsie look adorable...especially Chess and Penny curled up in a lap!
I was telling my Dh about your post, and how I needed to show it to him, and how you had baby turkey's in it. He has been wondering about raising Heritage Turkey's---have you heard of them? are your turkey's for consumption? that is what Dh is wondering about--if I could raise them and be okay with eating them. I've raised the white turkey's before, and golly--they were difficult to keep alive! They really didn't have a lot of brain power...
Nice to see your calves and steer! Such funny names!!! Got to love that!!!
****Thank you so much for such a lovely post! Dd and I have really been enjoying it this week!********Yay! (but, now I want more cats!) Any pictures of the pigeon's your hubby cares for? maybe next critter post??