Reading through the major works of Jane Austen was one literary goal Daisy wanted to achieve during her highschool years
Last year she asked me to pencil in some of those books for her to start reading; forget me needing to pencil them in - she's already completed five of the titles we selected out.... and really enjoyed them!
We started off with Pride and Prejudice, Daisy then asked for Sense and Sensibility, followed by Emma, Mansfield Park, Persuasion, and she is just about to start Northanger Abbey. 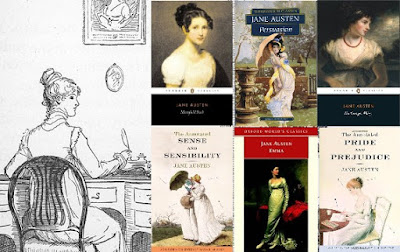 Along with comparing and contrasting various titles,  we've also taken time to do a few film studies, namely Pride and Prejudice, Emma, Sense and Sensibility,  and noted similarities and differences between the corresponding book and film.   We've tried to go with the BBC reproductions of Austen's work, as their interpretations are truer to the story line in the books.

One 'study guide' we selected for Daisy to use as a companion read beside these titles was Miniatures and Morals; the Christian Novels of Jane Austen ~ Peter J. Leithart. 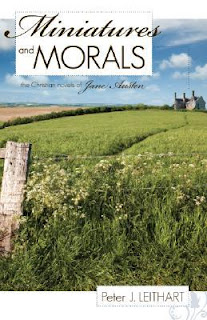 The book, as the title suggests, is decidedly Christian; just what we wanted.  Other guides we looked at tended to read things into Austen's world and work that maybe was not there (shrug).
Miniatures and Morals is a rich, thought filled read,  which gave us an opportunity to delve deeper into literary and biblical themes in each book; and, to take a study of the characters, along with a study of character, or lack there of ;).
I like that Leithart highlights points of historical importance going on during the era the books are set in and appreciate that the review questions and thought questions are spread out through the study of each book, not just chunked together at the end. 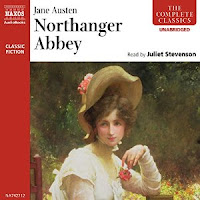 For those that have students who do not want to read through Austen's works but would like to have at least 'covered' them;  there are some very well read options on audio book.  (Listening to the  audio book version was the only way I willingly persevered with Emma, and, Northanger Abbey.)

For those that have an audible account; it does pay to make sure you 'purchase' the free whispersync kindle ebook available on Amazon first (listed and linked beneath)  - then go and scroll through the audible options - it makes the price for a well read book very doable.   I think with one title I purchased a kindle ebook that cost me about $0.86;  which was worth the small cost, so that I could have Juliet Stevenson read to me.

There are free audio book listens via loyalbooks - though I do prefer my British Literature to be read with a British accent , not an American one :-)
Also free is Karen Savages narration of a few Austen titles, which are well read, if a little quickly. (Her narration of Baroness Orzcy's, Scarlet Pimpernel series, remain some of my favourite audio books.)
Lit2Go offer 2 books, Sense & Sensibility, &, Northanger Abbey in audio & pdf format, and have accompanying student pages for both those titles
There are many other sites that have works of Austen for free, but I'll stop with those three.

For those in New Zealand, sadly,  ePukapuka do not have any ebook or audio copies of Austen's works currently available on their site.  Hoping this will change!  We are fortunate that our towns public library has a good selection of both the printed works and recorded book (audio CD) options though.

I've enjoyed going through Austen again, beside Daisy, and am thankful that she has the opportunity to select the classics she really wants to read during her highschool literature studies.
And the bonus is, reading Austen definitely counts towards her British Literature Studies ☺
Posted by Chelle at 5:33 PM