Sonlight Forums, and, Our Years with Sonlight Literature

We often get asked do we use Sonlight, or, are we still using Sonlight Curriculum, and do we use the Sonlight forums.
I'll chat about curriculum (literature) first, and the Sonlight Forums further down this post - see our  2016 update at the end.
(And please note:  this is not a Sonlight bashing post ☺)

The answer to the first two questions is; sort of, and as we get further into our high schooling years it's becoming hardly at all.

Sonlight Curriculum?
In a nutshell; we've been reading through the literature choices Sonlight has selected out to use in their Cores since 2004: they've chosen some great books.
Lynn, in Australia, introduced us to Sonlight literature all those years ago and as we wanted to educate from a literature base, we've ended up going on to read a lot of Sonlight's literature selections alongside their pre-2012 booknotes. 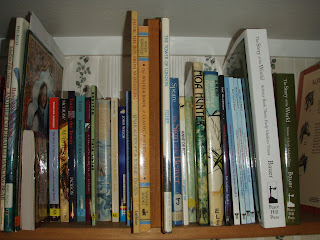 Sonlight, that way, used to work perfectly for us.  Just loved it ♥
As the children have gotten older we started moving away from even doing that.  (Daisy is still reading quite a few SL titles in 2015 -  Jay, not so many.)
Here are the books scheduled for this year that are from Sonlight's selection, and that I have a collection of separate booknotes for:

Sonlight's upper cores, and especially the post-2012 guides, don't tend to mesh well with where we are wanting to go in our history studies during high school;  World history over four years with a wider range of literature is what we're aiming for.


I used to purchase the Instructor's Guides and any titles printed by Sonlight, along with Sonlight's Timeline Figures,  through their website.  We ignored SL's schedules and just pulled out their booknotes to use. Before I discovered Book Depository - we would buy many of the books, in bulk, through eBay and get them posted by the now obsolete M.bag.  ($25.00 USD for a huge sack of books).

Our days of purchasing anything through Sonlight seems to be over, for now, ... their Instructor's Guides changed in 2012 and that was the end of purchasing new cores for us.  My last IG purchase was for British Literature; I thought I was purchasing the pre-2012 version - I wasn't!  They'd all been sold - and ended up with the newer piecemealed version.  Sonlight's staff were so helpful with ensuring we got the IG back to them as painlessly, for us, as they could.  Without any doubt, Sonlight does have the best customer service - only made possible by the top quality people they employ!

I digress .....  I really don't need, nor have ever wanted a Sonlight schedule to follow, not even in the first year of home educating.  I started out customising the schedules Janet and Amy had shared to go with Pre-K ... might sound teeth grinding to some of you, but I enjoy creating our own schedules.  It's become a home educating hobby :D
The customised schedule we type up each year co-ordinates many of the history, English and science items we are wanting each child to use separately, or those that we hope to enjoy together as a family.
My schedule is not my master, it's a guide for me to deviate from at any point I like.  And I do. There are no rules that say we have to do everything I've included in our schedule - items get sidestepped or replaced as suits.  One year one of the children made a huge leap forward in their reading level - time to reinvent the schedule.

With the latest Sonlight Instructor Guides, the way the booknotes are now designed to be used has changed too; they are more like one of the earlier Sonlight schedules that had the booknotes shared on the back of each weeks schedule.
The booknotes are, once again, grouped together to be used piecemeal with each week's schedule.  That change finished us off being able to pull the booknotes out separately from any core and slide them into my own working folder at any place I had chosen to schedule a Sonlight book in to be read. :(
We'd often have a selection of books from four different Sonlight Cores slotted into a single learning year for us. Imagine the post-it tabs needed to make that happen with the new IG's.

Time to switch gears and chat about the forums:
The Sonlight Forums have, 2014/2015, changed back to being free (ducking so I don't get egged by some of you ☺) and are much more open to the general public.  I wasn't  sure long term how that was going to affect my usage over there; and understandably, the reality appears to be that we're no longer Sonlight enough especially with the IG changes  - grin  We were diligent "Sonlight reinventors"  from the start but fitted into a small niche on the closed  forums
-  so I don't feel I have much to contribute to those using the *new* Sonlight Cores that could be of help.  And as we're moving further on into our NZ based highschooling journey my approach to homeschooling is less and less Sonlight literature-centric.    I still pop on & off the forums occasionally, but mostly to answer private messages the sweet friends I've made, via the old SL forums, send me.
I think my favourite years on the forums were while we read through Core K, and then the last 2 years, 2013, &, 2014, on a customised World History chat.

Sonlight kindly allowed those of us that wanted to, to clear our personal posts before the forums went public.  I made good on that offer.
And, sadly, so did others that had some wonderful, eloquent, help filled posts there.
Poof!
All gone.
Ah well. For some, change doesn't always feel like progress ;-)

The open forum / newer curriculum changes may be what others love; so, please, don't be put off by me!
The "open and newer" may be a custom-made fit for you.

(I just wanted to post this here as quite a few of you, that read our blog, are on other groups with us,   and/or are on the Sonlight Forums, have been asking over the last wee while;  what, or where we are up to with Sonlight now - and where we've gone due to the 2014/2015 changes on the Sonlight Forums.)

2016 Update:  Sonlight has once again included the book descriptions in their catalogue; such a good move!!
And due to the book descriptions, we made our first Sonlight purchase in years; the parents guide for Sonlight Core 300 literature; SL Lit 330.  I'm going to use this to enhance our Modern Times Literature readings; and yes it is still piecemeal but I can navigate around that since we're only using it for a handful of books this year, and then a few next year.  This is amazingly the last SL purchase we'll ever need to make.
Nov 2016.  With Sonlight making a significant push to try and regenerate more activity on their forums, and 'gather the troupe or troops' back in to post n chat  - really hope things go well for all! and doesn't recreate retro-influenced drama - I figured it was time to finally unsubscribe as a SL member:  I've become even more intentional about where I spend any online time I choose to have.  This year has definitely been one of 'moving forward' and sidestepping extra, time-consuming, distractions - and so I've been actively unsubscribing from many of the blogs, and homeschooling groups I used to participate in and that are no longer applicable to where we currently are in our educating journey  ie: blogs and groups sharing, lovely,  reading lists for 10-year-olds,  or a favourite grade 3 writing curric just aren't that help filled anymore :-)
Added to that,  home educating in NZ, for our family, certainly has a very different look to most of our U.S contemporaries...... I mean how many U.S based homeschoolers are using Te Kura and delight led studies to complete their student's education at home journey ;-P
Posted by Chelle at 3:08 PM