Dusting off an old (!) post and hitting publish :)
C.S. Lewis at War: The Dramatic Story Behind Mere Christianity (Radio Theatre)
This set includes a dramatised (Focus of the Family, Radio Theatre Quality!) life of C.S Lewis and the story behind the creation of Mere Christianity.  Highly recommend!

I haven't listened to the Mere Christianity reading yet.

Review from the web: Mere Christianity  is touted as one of the greatest Christian books of the twentieth century and was created as a series of radio broadcasts in a time of great conflict and adversity. England had gone to war with Germany. It was a time of strain, heartbreak, and weariness.
The leaders at the BBC knew the nation needed a moral underpinning to face the crisis and embarked on an aggressive program to provide it. So they commissioned some of the greatest Christian minds to step up. C.S. Lewis agreed to help, resulting in the now-famous Broadcast Talks that became Mere Christianity.

Beorn, a pagan Viking from Denmark, becomes a better ruler as a result of the influence of Ness, a Christian girl he took from Ireland as his slave.
We didn't enjoy this as much as we thought we would.
We preferred The Story of Rolf & the Viking's Bow ~ Allen French - perhaps because the children are older, and the Viking Bow is a grittier read with lots of opportunity for discussion.


Wicked Will: A Mystery of Young William Shakespeare ~ Bailey MacDonald

Set in 16th-century England, this fresh and original historical mystery introduces a young sleuth named Will Shakespeare, a boy from Stratford-on-Avon with an active imagination and a penchant for trouble.

Daisy enjoyed this very short, easily read chapter book. This is a small chapter book that is big on character lessons!
In order to wear the crown of the kingdom, an arrogant young prince must find an equal in his bride. Instead, he finds someone far better than he currently is.

Merry has written a devotional styled book that takes us along on her journey of learning to trust in God as the Marinello family strives to navigate through the maze of living with a debilitating illness.
I'm sip reading this set of devotional excerpts - 101 in total - and am appreciating the encouragement  this book offers: though no one else may see or understand what we may be going through, our hope is in Christ - who is with us - through all trials.

We are enjoying reading this collection of stories behind the hymns.  It's  the perfect book to have tucked into our sip reading book basket, we've been pulling it out to read from during family reading time in the mornings.
The hymns are in chronological order, which makes it helpful if someone was wanting to schedule them into a history study.
As a go-along to the book, we try to listen to the hymn online. 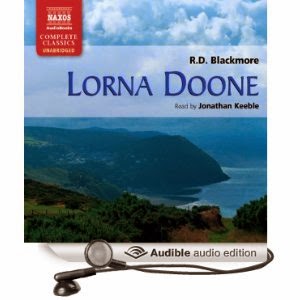 I'm {still} going through this romantic classic as an audiobook, to see what the content is like before I hand it to Daisy later this year... maybe.  Some of the content in it is mature, and I want to discuss those portions before Daisy starts the book, either this round through the 1600's or her next time through.
So far, I'm enjoying the wordiness of this book! And Jonathan Keeble reads it so well.
Updated Comment 10/2014:  Recommending a parent knows the content of this book - the first chapter has an older woman verbally admiring the physical attributes of young John Ridd washing at the the pump.  One of the final chapters give details of a woman being violently snatched from her home by the Doones and her young child slaughtered.  Not wanting to add a spoiler.... but the shooting of one of the main characters and the ensuing chase and life for life struggle that follows will provide a very good spot to discuss 'vengance' and payback mentality with my highschoolers.

An amazon customer wrote this very help filled review:
{clip} The story is told by John Ridd whose father is killed by one of the Doones when John is 12. One day John accidentally wanders into Doone Valley, where he meets 8 year Lorna. He is immediately smitten and what seems an impossible romance develops several years later. The brutal Carver Doone wants Lorna for his wife, so John must rescue her. The Doones, of course, want her back. John and Lorna also have to overcome differences in rank (she has it, he doesn't), money (she has a lot more than he does) and religion (she's Catholic, he's Protestant).
Blackmore's book vividly describes the Devon countryside in which the novel is set, and the lifestyle of a yeoman farmer. Some people may find all these details unnecessary, and a distraction from the central story but I really enjoyed learning about the lifestyle of late 17th century rural England.
The story is set against the historical backdrop of the death of King Charles II, the Monmouth Rebellion, the brutal suppression of that rebellion by Judge Jeffreys known as the Bloody Assizes, and the short-lived assent of the very Catholic King James to the throne (and fears of 'Papist' rule). I recommend doing some brief research on these events on the Internet before reading this book. An understanding of the historical context will make this an easier and more understandable read.

wishing you were here with me today...so I had to stop in and read a few words from you! Sending you a warm hug as I think and pray for you!