I've been slowly working at getting everything into some sort of working order so we can start 'scheduled' learning again.

We started with reinventing our chore 'helps' ... it's time for us to move on from the chore board (Family Pegs) though the children still like it up to hang their privilege tags on.

I've reinvented the Kids Work template/idea sourced from here and customised it to suit each child - we use a two week rotation: Each child does a different set of helping tasks in the second week than they would do in the first week.

Bobby & Daisy are old enough now that they can take full responsibility to get the next task done, tick things off on the sheet and let me know to come check.

We call it our recall sheet, not a chore sheet - it may be a case of semantics, but it works :-)

For us this is a good way to ensure force of habit is happening with mum being a support, with gentle questioning from me on how are they getting on with their recall sheet ... a bit like the example Charlotte Mason recounts in the story of a young boy as he masters the habit of 'learning' to close the door properly - gentle reminders on the part of his mother were initially given to help bring the habit into force.

I'll mention more about Homeschool Tracker at the end of this post.

We've had our outline schedules typed up for a while that correspond to SOTW3 & the first part of Core alt 3/4 etc.... those can be found over at hslaunch. 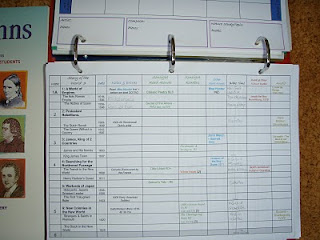 It took me a while longer to get our folders organised. 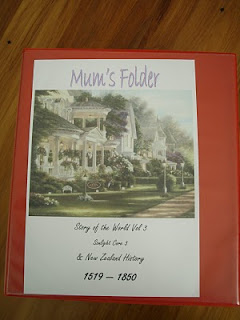 I wanted a more C.M feel to my planning so we downloaded Sonya's ebook planner, over at Simply Charlotte Mason .

I've pick the pages of encouragement to use to help us along with our planning, printed them out - prayed, pondered and prayed some more - then got to work setting things down to spring board from.

One of the ideas in Sonya's planning pdf that I had not got around to typing up 'officially' before was the long term/end goal of what Dn (my husband) and I we're aiming for.
I'd sorted through why we wanted to homeschool right back at the beginning - that long term goal write up is a totally different exercise for us.

Creating those sheets of paper (yes, sheets - only two of them though) has helped to iron out some of the curriculum choices I'd been entertaining for use at a later date.

I've tucked those handy little sheets inside my homeshooling folder for easy reference when we need to make educating choices.

Another blessing, and it really shouldn't have come as a suprise, that process re-enforced for Dn & I that our family is more interested in studying nature and natural sicences, as opposed to chemistry and physics. Though Bob will tamper around with those topics when the mood strikes. It will be interesting to see if that focus changes for the children as they get older.

We'll carry on with 'delight led' science in the chemistry & physics arena, should the children choose to. Bobs & Daisy enjoy using the science boxes from Exploration Education in their delight led approach.

And with science other right now: Dn assembled the digitalised weather station so we're all set up to go much further with our ongoing interest and enjoyment with weather: he's a gadgets man :)

I digress - back to planning:
We also are using some of the pages out of ebook version of the New Zealand Homeschool Planner and Diary (there is a USA one available too). 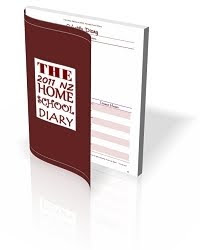 The diary pages were exactly what I was wanting for my folder - time to create things lately has become rather scarce, so any help from pages others have created is a real bonus.

Using Stepanie's calender and term timetable idea's, we've got all our terms,holdiays,and 'weeks off' sorted out. Now just to start with the important task of actually using these things as guides.

And yes, we are still using portions of Homeschool Tracker to set up the individual schedules I need for math, and for our daily time plan. I'm using my own schedules for readers etc..

edit that>In our next post, I'll detail with pictures the way we've set up our folders.
I thnk I'll leave the detailing with pictures (unless someone asks for visuals) since our folders haven't changed so much from our first set up ... just developed into a more stream lined system with a greater volume of work contained behind each tab for Bob & Daisy.


& I have a smaller working folder also, to toss around during the week which contains 6 weeks work all tucked behind tabs and 'important' to marmee things.
Posted by Chelle at 10:32 PM

Ahhh. Yes! She IS back! Good to see you reentered our hs village chelle.